Shepastor: “The Mark of a Christian Part II” 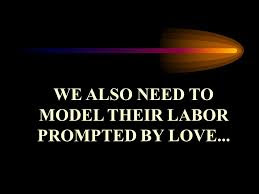 1 Paul, Silas[a] and Timothy,
To the church of the Thessalonians in God the Father and the Lord Jesus Christ:
Grace and peace to you.
2 We always thank God for all of you and continually mention you in our prayers. 3 We remember before our God and Father your work produced by faith, your labor prompted by love, and your endurance inspired by hope in our Lord Jesus Christ.

Last week, Shepastor explored the example set by the Christians in Thessalonica. In particular, we looked at their “work produced by faith.” This week, we consider the 2nd powerful characteristic exhibited by the Thessalonian Church, their “Labor prompted by love.”

Paul lifted this characteristic of the Thessalonian Christians. He honored them for labor prompted by their love. You have heard the phrase, “it was a labor of love…” The term labor connotes something more than just work. It conveys a sense of struggle, a pushing, even painful. When mothers are giving birth to a child, they refer to it as “labor.” They can tell how close the mother is to giving birth by the strength of the labor pains. When the baby is about to come forth, that’s when it hurts the most!

Paul said that the Thessalonian Christians’ labor was produced by their love. Even though it hurts, that mother is willing to go through the pain because they know that on the other side of that pain, will be a beautiful baby that they will hold, nurture, love and cherish for the rest of their lives. In a similar way, we push, we press, we suffer, we struggle to bring forth that which the Lord has planted within us because we love the Lord. Not only that, we love one another. Love will make you go the extra mile of the way. Love will compel you to get up and do what you don’t feel like doing. Love will urge you on when you feel like stopping. Love gives you what you need to press on further.

When we love something or someone, we go all out. We may not have much but we scrape together what we can to fulfill a need of someone that we love. SO in addition to having work that is produced by faith, another mark of a Christian is that their labor is prompted by their love.

Working in the church can be hard. Serving in the church, while it’s a joy, it can also be laborious. When nobody is watching, when nobody is applauding, when very few are serving and even fewer are witnessing, the “labor” then rests on a few. That happens in ALL churches, large, small and mid-size. Every church has what is called the “faithful few.” Because the labor of the ministry takes dedication. It takes sacrifice. It takes patience. It takes endurance. It takes LOVE…love of the Lord, love of God’s people, love of Christian discipleship and love for the lost. Jesus said, “They will know that we are Christians BY OUR LOVE!” 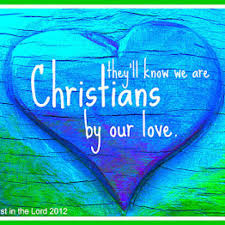 Love moves the Christian into a dimension above those who are just carrying out duties. Love is patient, love is kind, love is humble, love is not easily angered, love endures testing. Love is the more excellent way! Love helps you to turn the other cheek. Love helps you to ignore foolishness. Love enables you to pray for your enemies. Love makes us more like Jesus! The Christian labors in the work of the ministry because of their love. The mark of a Christian is labor prompted by love.

Next week we will look at the third mark of a Christian in this text, “endurance that is inspired by hope."

Until then,
In Faith, Hope and Perseverance,
Pastor Chris
www.shepastorchris.org

Shepastor: “The Mark of a Christian Part I” 1 Thessalonians 1:1-3 New International Version (NIV)
1 Paul, Silas[a] and Timothy,
To the church of the Thessalonians in God the Father and the Lord Jesus Christ:
Grace and peace to you.
2 We always thank God for all of you and continually mention you in our prayers. 3 We remember before our God and Father your work produced by faith, your labor prompted by love, and your endurance inspired by hope in our Lord Jesus Christ.

The Thessalonian Christians were discouraged. Their loved ones were dying, time was passing, the church was being persecuted and it appeared that all hope was lost. This letter encourages the believers to keep the faith, knowing that God was with them, their faith would be rewarded and that Christ will return. The Apostle Paul begins this letter by lifting up the Thessalonians’ strong witness of faith, born out by their actions. He encourages them by letting them know that they are example to Christians everywhere, an example that continues to instruct us today.

In these few short verses, Paul outlines 3 impressive characteristics that the Christians at Thessolonica exhibited. (1) Their work produced by faith, (2) Their labor prompted by love and (3) Their endurance inspired by hope in Christ Jesus. In Part I of this series, we will explore the meaning of the first characteristic, “Work produced by faith.”

Let’s take a moment and consider “work produced by faith.” Picture in your mind where they were. Thessolonica was a large, metropolitan trading center in Greece. It became the capital of Rome. It was a busy business area with people from all over the world, selling, buying, bartering, arguing, pushing, shoving, demanding, drinking, cursing, possibly lewd and crude behavior. If you’ve ever been to New York City, downtown during rush hour or even just during other times of the day, you can get a sense of the hustle, bustle, fast pace. Now imagine trying to live a life that is completely opposite of that culture. Add to that persecution from the people around you as well as the government. That was the lot of the Christians in Thessalonica!

They were doing all that they could to learn, grow and walk in their new relationship with Jesus. They were swimming against the tide. They were also deeply committed to sharing their faith with others. They were workers. But not just any kind of workers, they were people who had work that was produced by their faith. It took FAITH for them to continue to do the work of the church in the midst of great persecution. They had to be able to see beyond what was before their eyes and believe that the sacrifice, their suffering, their struggle, their undaunted actions were not in vain. 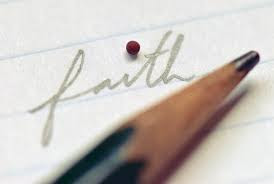 You speak those things that be not as though they were. You remember where you’ve come from and you believe in where you are going. One mark of a Christian is work produced by faith.

Next week we will consider the 2nd powerful characteristic exhibited by the Thessalonian Church, in Part II of this series, "The Mark of a Christian: Labor prompted by love.”

Until then,
In Faith, Hope and Perseverance,
Pastor Chris
www.shepastorchris.org