Shepastor: “Understanding Who We are and Where We Are…The Search for Authenticity in the Midst of Ministry” 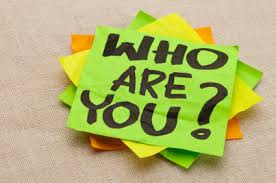 O LORD, you have examined my heart
and know everything about me.
2 You know when I sit down or stand up.
You know my thoughts even when I’m far away.
3 You see me when I travel
and when I rest at home.
You know everything I do.
4 You know what I am going to say
even before I say it, LORD.
5 You go before me and follow me. Psalm 139: 1-5, NLT

Who are you? Where are you? Do you know? How are you…not what you present to other people but what is happening down on the inside. Frequently, when we minister to others, we will come face to face with ourselves. If unprepared, the impact could be devastating for you and the one you seek to serve. If you have not explored and honestly confronted your “stuff,” it may be difficult to lead others in that process.

Being true to ourselves…knowing our own weaknesses, strengths, vulnerabilities, giftedness, hurts and scars can position us to be used by God in beautiful and powerful ways.

In The Wounded Healer, by Henri J.M. Nouwen, the power of authenticity in ministry is unpacked…

Ministers are those who can make their search for authenticity possible, not by standing on the side as neutral screens or impartial observers, but as articulate witnesses of Christ, who put their own search at the disposal of others. This hospitality requires that ministers not only know where they stand and whom they stand for, it also requires that they allow others to enter into their lives, to come close to them, and to ask how their lives are connected with one another.

Nobody can predict where this will lead us, because every time hosts allow themselves to be influenced by their guests they take the risk of not knowing how their lives will be affected. But it is exactly in common searches and shared risks that new ideas are born, that new visions reveal themselves, and that new roads become visible.

If you have not first explored, unpacked and confronted your own issues, it will be very challenging to enter and to allow others to enter that space where hearts meet, life struggles are shared and new understandings spring forth.

Of course, boundaries must be respected. Authenticity in ministry does not mean “letting it all hang out.” It does mean allowing enough of oneself to be present, open and “real” in order that the one in need of assistance experiences the warmth of humaneness.

May we spend time learning, really learning ourselves…strengths, our gifts, our wounds, our triggers, how our presence impacts a space, so that we are clear about our offerings to those we seek to serve. 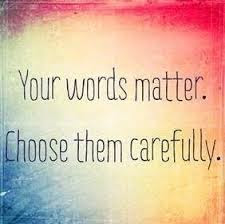 You brood of vipers, how can you who are evil say anything good? For the mouth speaks what the heart is full of. Matthew 12:34, NIV

Not many days hence, the election season of 2016 will be in the history books. Words spoken, however, throughout the course of one of the most contentious presidential races in modern times will linger. Front and center have been the remarks made about women. For centuries, women have borne the brunt of abusive, oppressive, degrading, shaming, and dehumanizing words and actions. Jesus warned that “out of the abundance of the heart, the mouth speaks…” While some may view lewd and vulgar comments as simply “boy or locker room talk,” the reality remains - words have power.

Abusive words unchecked can lead to abusive actions. When toxic words are mis-characterized as “harmless” or minimized as fun and frolic, the object or the target of those words are left defiled, broken, humiliated and without recourse. Additionally, behaving as if harmful words are “ok,” create paths for further mistreatment and abuse. When individuals feel that it is ok to say anything they want, they tend also to believe that they can do anything that they want. This “anything goes” against a woman mentality dehumanizes women and makes them vulnerable to many and varied forms of abuse. 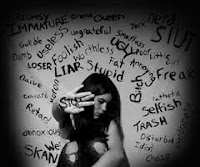 In 1993, the United Nations prepared a “Declaration on the Elimination of Violence Against Women.” In spite of this noble attempt, the following statistics still loom large…


•Worldwide, more than 700 million women alive today were married as children (below 18 years of age). Of those women, more than 1 in 3—or some 250 million—were married before 15. Child brides are often unable to effectively negotiate safe sex, leaving them vulnerable to early pregnancy as well as sexually transmitted infections, including HIV [6].

•Around 120 million girls worldwide (slightly more than 1 in 10) have experienced forced intercourse or other forced sexual acts at some point in their lives. By far the most common perpetrators of sexual violence against girls are current or former husbands, partners or boyfriends [7].

•At least 200 million women and girls alive today have undergone female genital mutilation/cutting in 30 countries, according to new estimates published on the United Nations’ International Day of Zero Tolerance for Female Genital Mutilation in 2016. In most of these countries, the majority of girls were cut before age 5. [8].

•One in 10 women in the European Union report having experienced cyber-harassment since the age of 15 (including having received unwanted, offensive sexually explicit emails or SMS messages, or offensive, inappropriate advances on social networking sites). The risk is highest among young women between 18 and 29 years of age [10] 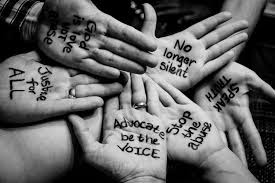 May we choose words that empower, encourage, enlighten, and uplift others over against abusive and dehumanizing words each day.

Shepastor: "Shaping Our Perspective Through Thanks and Praise..." 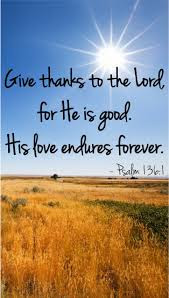 Psalm 136:1 King James Version (KJV)
136 O give thanks unto the LORD; for he is good: for his mercy endureth for ever.

Life happens. With its many ups and downs it’s easy to get caught up in current moments…be they good or bad. The people in ancient Israel understood this principle as they faced many tumultuous times. Scholars suggest that Psalm 136 was a responsive reading read at Temple services to remind God’s people of God’s consistent love and mercy in every season, situation and circumstance.

The first portion of this psalm reminds readers that God is all powerful… “God of gods, Lord of lords.” This is the God who alone does GREAT wonders and is the creator of the world and all therein. After a litany of the many awesome wonders of God’s creation, the Psalmist moves into enumerating the names of kings and lands that were defeated before them. They are reminded of the miracles that were performed on their behalf when it appeared that all hope was lost. Finally, the Psalmist reminds the readers that God remembered them in their “low estate,” and that God has always and will continue to supply their needs.

As we reflect upon these movements from category to category, we too can create our own litany of thanksgiving and praise. As “life happens” to us we can choose, like the Psalmist and the children of Israel to shape our outlook of situations and circumstances by remembering God’s faithfulness to love and be merciful to us.
When difficulties seem to overwhelm us, we can remind ourselves that our God is God and that He alone can do great wonders…that God is King of kings and Lord of Lords and that this all powerful God is on our side. 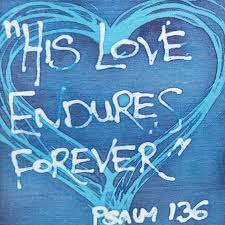 Finally, we can trust that just as God provided for our needs in the past, God will continue to provide what we need moving forward.

Yes, thanking and praising God can help change our perspective. Instead of succumbing to defeat we can remind ourselves of God’s unfailing love, steadfast faithfulness, grace and mercy. Certainly, we are not as those who have no hope!

Oh give thanks unto the Lord, for He is good and His mercy endureth forever!

Shepastor: "Watch What You Pray..." 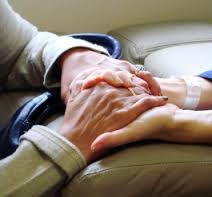 8Three times I pleaded with the Lord to take it away from me. 9But he said to me, “My grace is sufficient for you, for my power is made perfect in weakness.” Therefore I will boast all the more gladly about my weaknesses, so that Christ’s power may rest on me. 10That is why, for Christ’s sake, I delight in weaknesses, in insults, in hardships, in persecutions, in difficulties. For when I am weak, then I am strong.II Corinthians 12: 8-10, NIV

Have you ever heard someone say, “I prayed, but God did not answer my prayer”? Frequently individuals express this sentiment when something hoped for does not happen. Such a response, however, negates the legitimacy of the answer “No.”

One of the most valuable lessons I learned during Clinical Pastoral Education (CPE) was the importance of thoughtful, “thy will be done” prayers. Often, in an effort to comfort, reassure and bolster faith in hurting people, well-meaning supporters will give answers for God during prayer. “God, I know that you will do this because you are all powerful.” Some will claim, in prayer that they heard God say this or that. “I heard the Lord say that you do not have this disease.” Some will chide, rebuke, challenge the ailing individual to have more faith and God will do this or that. They may even suggest that the reason why an individual has not been healed, delivered, restored, etc., is because they don’t have enough faith. All of these assertions are dangerous, damaging and potentially deadly. Are there times when God uses individuals to speak a prophetic word of hope, vision and "against all odds" deliverance? Absolutely! But it is critical that caution be used when making such claims.

A well-known Christian author who experienced a devastating accident that left her paralyzed from the neck down frequently testifies about the pain caused by the aforementioned attitudes. After years of attending special prayer services, experiencing the “laying on of hands,” and “prayer partners” telling her that if she had enough faith, she would get out of the wheelchair, she finally challenged them back with the question, “Do you have enough faith to sit in this wheelchair?”

Sometimes, God says “No.” No matter how much faith we have, no matter how well we know the scriptures, no matter how long we have been walking with the Lord, we will never know God’s thoughts or the details of God’s ways. It is spiritual malpractice and arrogance to suggest through prayer that we can predict/ “prophesy” outcomes. Many a vulnerable soul has been deeply discouraged, distraught and severely broken because of wrong perspectives prompted through bad prayers. 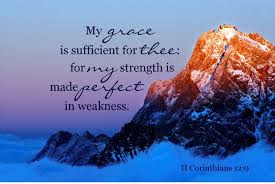 Instead, here are some basic guidelines we should follow when supporting others through prayer…

-Listen with an open heart…allow the person to share their heart’s desires, worries and concerns

-Share words of comfort from the scriptures…identify passages that express hope, trust and guidance in the midst of fear, sorrow and disappointment

-Join the individual in asking the Lord for their specific requests, encouraging prayers that are submissive to God’s holy will.

-Affirm that it is always appropriate to ask God. Remind them that God, however, is sovereign and has the last say.


May we “1st, do no harm” in our endeavors to support others through prayer.