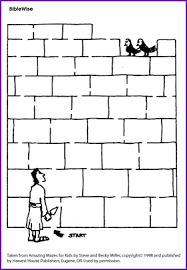 1When word came to Sanballat, Tobiah, Geshem the Arab and the rest of our enemies that I had rebuilt the wall and not a gap was left in it—though up to that time I had not set the doors in the gates— 2Sanballat and Geshem sent me this message: “Come, let us meet together in one of the villagesa on the plain of Ono.”
But they were scheming to harm me; 3so I sent messengers to them with this reply: “I am carrying on a great project and cannot go down. Why should the work stop while I leave it and go down to you?” 4Four times they sent me the same message, and each time I gave them the same answer. Nehemiah 6: 1-4

Over the last several, years, months, weeks and days, we’ve seen many and varied examples of what it takes to rebuild. We’ve seen our Nation struggle to rebuild a sense of community after the tumultuous 50’s and 60’s where African American, White, Jewish, Catholic, Protestant, Indian and other peoples stood together to fight against the evils of Jim Crow, lynching and racist ideologies to declare all people are created equal and endowed by their creator with certain inalienable rights… a fight that we are still struggling to navigate through today. We’ve experienced our Nation’s struggle to regain a sense of normalcy after the 911 attacks, attempting to process through the impact terrorism has had upon our everyday lives. We've endured senseless mass shootings of innocent people in churches, mosques, synagogues and other public places. We wrestle to grasp the nature of rebuilding...

In our text for today, Israelites are being confronted with several challenges as they seek to rebuild.

They had to have the courage to resist the enemies of the rebuilding process.

The enemies of the Israelites came to them pretending to want to help them rebuild, but their leaders discerned that their intentions were not honorable. This fact is borne out as we read further and see that after the Israelite leaders rejected their proposed help, the enemies went about seeking to discourage, block, frustrate and ultimately destroy their efforts to rebuild.

Nehemiah discerned that they were scheming to destroy their efforts. He knew that he was carrying on a great work and refused to come down.

We too must have the courage and the discernment to see when wolves in sheep’s clothing offer to help us rebuild. There are some aspects of your life that others can’t rebuild – only you and God. Sometimes people secretly resent you and see that you are headed for higher heights. Outwardly they appear to want to help you, but secretly they are hoping to see you fall. In relationships, you can’t tell everyone about your struggles. You can’t tell every girlfriend that you and your husband are having a fight over thus and so. Some friends aren’t true friends but are wolves in sheep’s clothing, secretly desiring to have what you have and be what you are!

There are those who don’t want to see you succeed. There are those who will do everything in their power to dissuade you, discourage you, make you afraid, try to make you think that your endeavors are an exercise in futility. But you have to have the courage, the discipline and the determination to push past all of that and keep on climbing, keep on moving, keep on building. Misery loves company and sometimes people want you to stay defeated and down because they are defeated and down.

But God is calling you to higher ground. Sometimes defeat-filled and discouraging words will come from unexpected places. Sometimes folks right in your family will speak discouraging words to hold you back. “Are you sure that you can do that? Don’t you think you ought to do something less demanding? You’ve already tried to do that once, why don’t you just give that up. Maybe it’s not God’s will for you.” Sometimes people are afraid to be left behind and yet they have little or no motivation to join the moving forward or rebuilding process, so instead of truly trying to help you move up, they are working to keep you down with them. But God is calling you to rebuild and move on up.

God is calling the church to rebuild. Mainline Protestant churches all across America are dwindling because of an unwillingness to rebuild. Fighting over structure, fighting over the constitution, fighting over the kind of music we sing, fighting over what we wear, just fighting. And while we fight to hold onto “forms of godliness,” those churches that have made the leap of faith to rebuild, to regroup and to move into the present, laying the foundation for the future, preaching the word and ministering in fresh and relevant ways are thriving. Rebuilding takes courage. 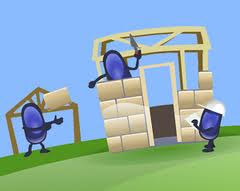 Sometimes the voices in our own head and heart keep us from rebuilding.
Sometimes we have been imprisoned for so long that we are afraid to even attempt to rebuild. The Israelites had been prisoners for hundreds of years. Therefore, when freedom came, they also had to face the internal questions of if they had what it took to make it. They’d been stripped, they’d been beaten, they’d been abused – they had been prisoners. Even though they started out with great enthusiasm, when the voices of doubt and discouragement began to rail against them, they wilted.

When we have been imprisoned, either physically or mentally, we have to fight against the internal and external voices that tell us the rebuilding process is impossible. Sometimes the formerly imprisoned start out with such high hopes, only to meet with a multitude of naysayers and doubters and negative commentators who throw cold water if you will on the power of new found freedom.

Sometimes we allow those voices to hold us back for years. The Israelites allowed their enemies to discourage them and it took the reign of two more kings before they actually began the rebuilding of the Temple. The rebuilding process is sometimes a long process. It may take months and even years to rebuild what has been torn down. If you allow internal or external enemies to fill you with discouragement, you will not rebuild but will give up. Sometimes the rebuilding process takes longer than it has to take because we stop and listen to the wrong voices. If you want to rebuild, you must remain focused on the task at hand.

What are you allowing to stop your rebuilding process? Naysayers will always stand on the sidelines and tell you what you can’t and shouldn’t do. But we have to take our marching orders from the LORD! We have to be discerning and open to the leading of the Holy Spirit. We have to ask the Lord to lead us in whose help we will accept and have the courage to trust Him, moving ahead even if it appears impossible. God is with you. Rebuild by faith. 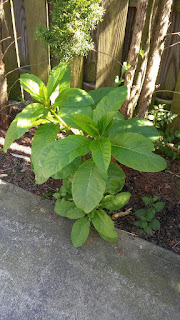 But if you fail to drive out the inhabitants of the land before you, their survivors will become irritants in your eyes and thorns in your sides, to prick your sides and afflict you in the very land in which you'll be living. Numbers 33:55, NIV

Today as I walked past the shrubbery in our yard, I noticed lovely, leafy, broad stemmed greenery. Indeed, it looked beautiful among the shrubs and other flowers. However, from previous experience, I knew that it was a weed, masquerading as a flower! While observing this deceitful, pesky invader, my mind wandered toward the tactics of the enemy.

Numbers 33:55 is a verse of scripture couched within the promised land journey. As the children of Israel were nearing the entrance into the land they’d prayed for, for generations, the stark warning they received remains relevant today…

But if you fail to drive out the inhabitants of the land before you, their survivors will become irritants in your eyes and thorns in your sides, to prick your sides and afflict you in the very land in which you'll be living. Numbers 33:55, NIV

Just like weeds, there are things that appear beautiful, innocent, pleasing, fulfilling that if left unchecked will destroy us in days to come. If the enemy were to come to us in “true fashion” we would quickly reject him. Weeds illustrate this point. Unlike the smooth, beautiful broad leaves on the one foliage, another weed bush was prickly and ugly. 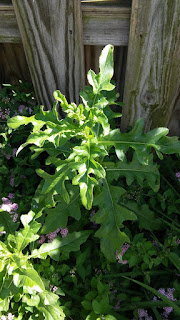 I immediately recognized that it was a weed. But for past experiences, I would have been fooled by the other. Though beautiful, their stems are hollow. They have nothing good to offer. Their root systems will destroy the healthy bushes and flowers in our garden. They must be pulled up from the root. 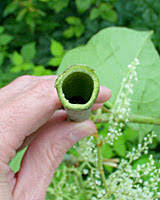 As you prepare to enter the place God has promised and prepared for you, maybe for generations, uproot those things that appear innocent, pleasing, beautiful, but in actuality are deadly. Uproot bad habits. Uproot those secret sins (that are not so secret – God sees you!) Uproot unhealthy relationships. Uproot anything that will hinder you for the true beauty God has for you in the land where you are going. Remember, it’s a weed!